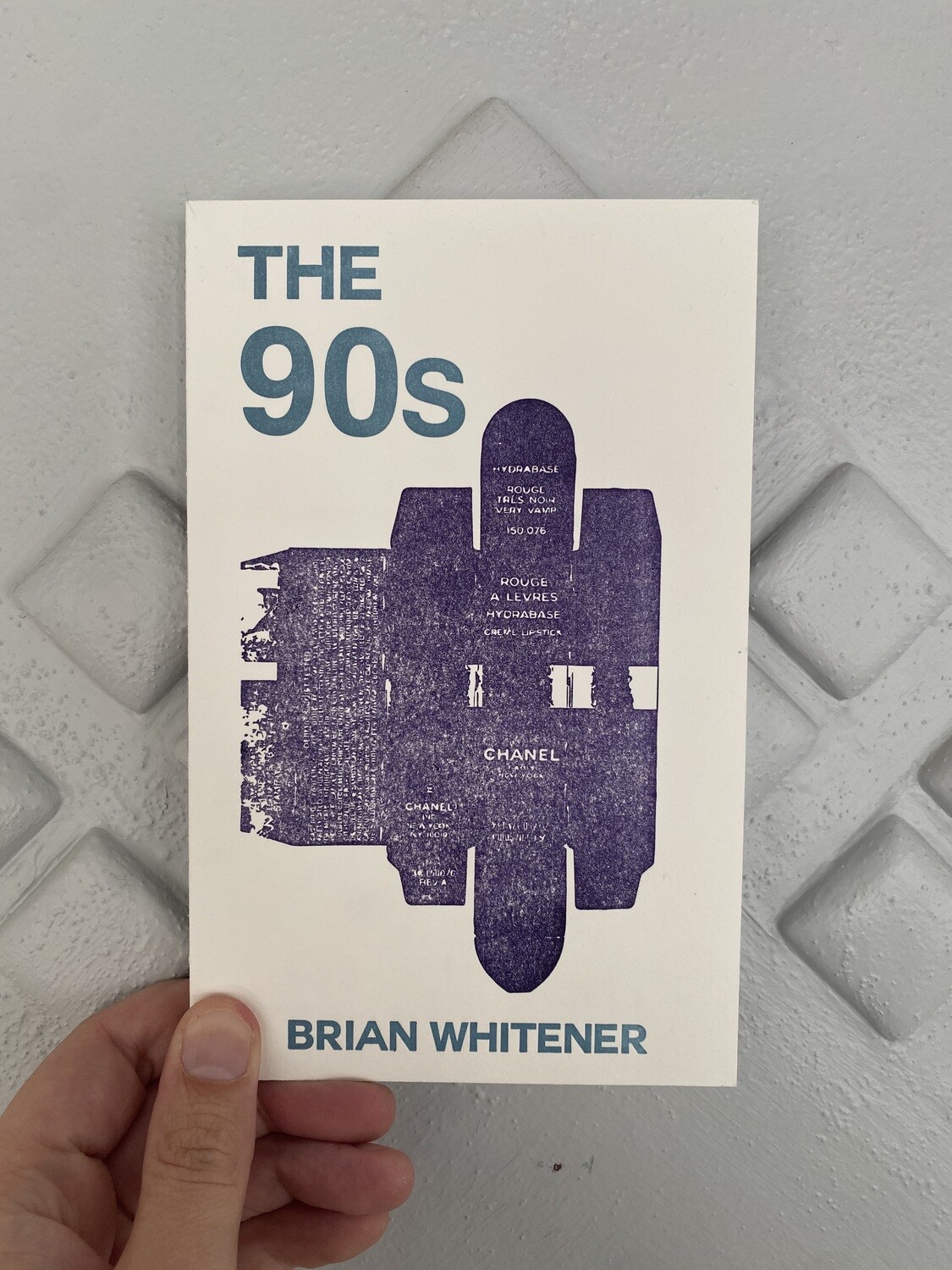 The 90s by Brian Whitener

Brian Whitener’s The 90s weaves together the language of media, of mainstream culture, of ideology of the 90s with the pleasurable vocabulary of lived experience of that moment. It also disaggregates the larger historical vocabulary and the personal vocabulary, over and over. It gets at history, gets at our entanglements and investments, makes a record of the embeddedness that’s often lost. Reading this book makes me wildly happy—I can see the moment and be aside from it; I can also dwell within it. The book begins by telling us to go to the bank, take all our money out, and give it to the first person we see. And this instruction reads as a little encapsulation of a different political moment, both more naïve and more cynical. Whitener, alongside Mark Fisher and the other great readers of cultural moments, shows us our own moment in relief, gives us the historical arc, lets us feel small as we’re thrown against the timeline, gives us a sense of the historical sublime so we can steel ourselves for what comes next. This book takes on a history of the affective culture of the 90s, operating at the macro level, and then also gives a personal micro-history, allows us to track a speaker, ourselves, the world all at once.

The poems contained in Brian Whitener's The 90s revel in the weird space between utter confusion and an absurd repugnance– just as we laugh at a poem's humor, we are confronted with the fact that we are guffawing amidst the poem's often oblique, fragmented references to devastation wrought by accelerating neoliberalism, asymmetric warfare, and the fracturing of spaces where genuine relationships might thrive. As a result, the reader's reaction after finishing Whitener's brilliant amalgam is "oh my god it shot through us, oh my god," perhaps giving credence to Sianne Ngai's theory that disgust, "in its irreducible singularity... continues to undermine attempts to neutralize its negative potentiality." The 90s delivers many surprises and joyful moments, but at its throbbing core takes this undermining as its purpose. "Neither/ from/ history nor/ bodies alone" will we find salvation or respite— "those troops have always been stationed on that corner," and Whitener's book is a rock thrown at them and all they protect.

A book written for no nation. And also a book written as a way of understanding a decade. Brian Whitener claims this book is made out of ruins and memory. But that is just part of it for The 90s well illustrates the continued relevance and strange beauty of a poetry that is more an intervention than a capitulation in the conventions of aesthetics.

Save this product for later
Display prices in: USD